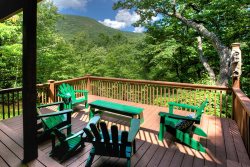 A Short Story of Yonah Mountain

A local story of Cherokees, Chickasaws and Army Rangers form part of the rich heritage of the North Georgia Mountains. Be sure to request a mountain view cabin near Yonah Mountain.

How did Yonah Mountain get its name?

The Cherokee Indians were well established, and considered to be the first inhabitants of the region that includes Georgia. These people are credited with naming several geographical areas, rivers and mountains and many of these Indian names still remain today. Mount Yonah was one of those areas named by the Cherokee Indians and this name “Yonah” was an Indian word that means "Bear".  In addition to being known as Bear Mountain,  Yonah Mountain was  often called  Sleeping  Bear Mountain. Yonah Mountain is also commonly referred to as Mt. Yonah by old-timers and people local to North Georgia, and Yonah Bald amongst the area’s rock climbing enthusiasts.  As the crow flies, this popular mountain is about 4.5 miles from Helen, and several of our vacation cabins are in the vicinity of the mountain, with incredible views from the deck of your vacation cabin.

A Cherokee and Chickasaw Legend – Sautee and Nacoochee

The Cherokee Indians also considered themselves to be a superior race. While they indeed were advanced, handsome, tall and intelligent, and while they even had an alphabet, the first in America, their arrogance did not endear them to neighboring tribes. One of these tribes was the Chickasaws.  With persistent fighting among the two tribes, a truce was negotiated and a time of relative calm ensued. The Chickasaws were allowed to cross through Cherokee land, resting only at designated spots. One of these spots was at the junction of two lovely valleys. As the Chickasaw band rested in the shade of a giant oak, curious Cherokees gathered around them.  Soon they were trading insults and obscenities.
One of the Chickasaws stood aloof from this bickering. His name was Sautee, the young and handsome son of a Chickasaw Chief. He dreamt of the day he would be Chief, and able to negotiate permanent peace with the Cherokees. Nacoochee, the sixteen year old daughter of the Cherokee Chief (Wahoo) is so taken by this handsome stranger that she stares unashamedly. Their eyes met and the magic alchemy of love did the rest. Not one spoken word and yet a bond was created.

Sautee and Nacoochee - a love story

Nacoochee steals away from her father's log house to meet with Sautee, under the giant oak.  By this time, they are hopelessly in love. The young lovers flee to nearby Yonah Mountain, spending a few idyllic days in a secret cave known only to Nacoochee.  But destiny calls to a larger purpose - peace between the two great tribes. To this end, out they come to face Wahoo.  He is blinded by hate and chagrin that Nacoochee would choose a Chickasaw for himself. He ordered Sautee thrown from the cliffs of Yonah Mountain, while Nacoochee is forced to look on.   Seeing no future without Sautee, Nacoochee tears away from her father and she leaps from the high cliff.  The young lovers are joined again at the foot off the cliff.  They drag their broken bodies together, and locked in final embrace, they two Indian lovers die.
This is how Wahoo finds them.  It is too late, and Wahoo is now overcome with remorse. He has the two bodies, still locked in death together, laid to rest on the banks of the Chattahoochee River, there to remain for eternity.  In their honor, he renamed the two valleys where the young lovers first met - one for Sautee and the other Nacoochee.

The history of climbing at Mount Yonah goes back to around 1960 when Yonah Mountain was home to one of the training sites for our elite US Army rangers. Ranger School is one of the toughest training courses for which a Soldier can volunteer. For over two months, Ranger students train to exhaustion, pushing the limits of their minds and bodies. One of these training phases includes mountaineering. During this phase, military mountaineering tasks are completed as well as techniques for employing squads and platoons for continuous combat patrol operations in a mountainous environment.
If you’re on Yonah Mountain or in the vicinity when the Rangers are training, you may see an authentic Army helicopter training exercise.  The  helicopters may fly in low and circle the mountain top, coming in close with maneuvering patterns. The steep cliffs create an ideal training scenario for the pilots to hone their flight skills. These test flights can be very entertaining to watch.

A friend of mine who is a retired Ranger once told me that if anyone ever said they enjoyed their Ranger training or said it wasn’t “that difficult” they were either crazy or lying. My friend also told me that when your Ranger badge was finally earned, it was sewn with green thread or white thread. Green thread indicated you had completed training during the nice and comfortable summer months. White thread indicated you had trained during the brutal winter months on Yonah Mountain. I had to ask which one was more difficult or prestigious. . .  it’s the white thread of course, but he also tempered with the statement “It’s very similar to picking your own poison…” 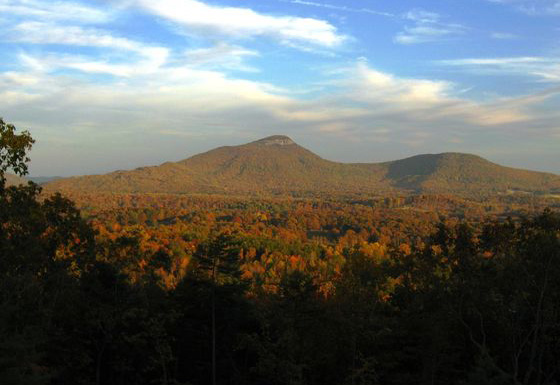 This photo was shot from the back deck of one of our most popular vacation cabins, Five Seasons on a crisp autumn day in 2006. While enjoying the scenery on the deck I captured my favorite photo of Yonah Mountain. 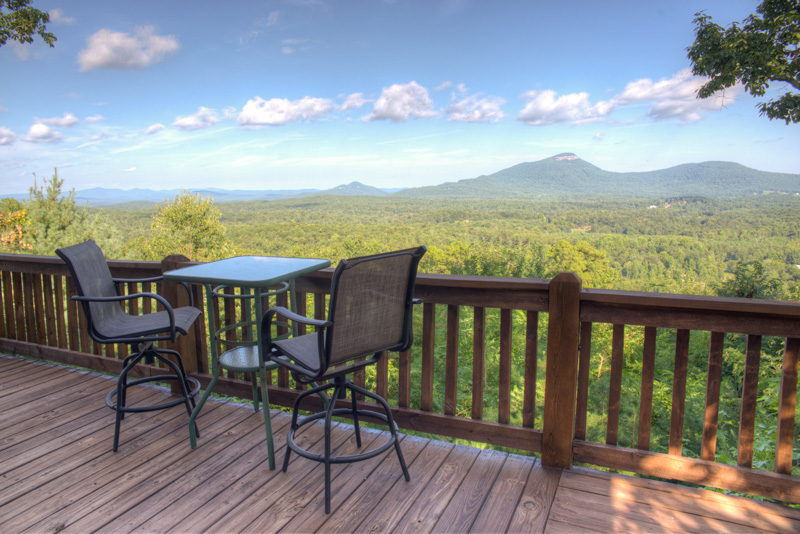 Each time we view our favorite mountain from one of our vacation cabin rentals, we are reminded of the rich history and heritage that our North Georgia mountains provide. We live in an area where real Indians lived and the legends they created long ago are with us. We love to share these experiences with our special guests at Pinnacle Cabin Rentals and we the hope you too are also in the right place at the right time to see the Army Rangers and their mountain training exercises.  Yonah Mountain and its natural beauty captures your heart and feeds your soul.

Jump to a Rental